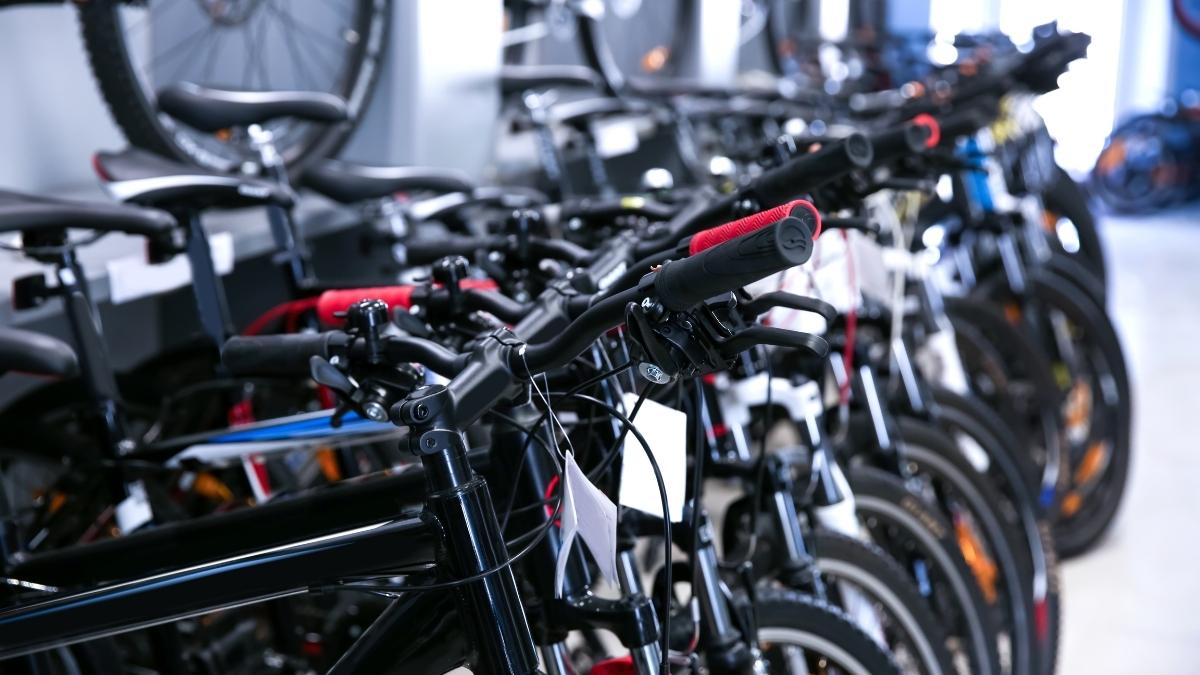 However, knowing the difference between electric bikes, or e-bikes, and hybrid bikes can be confusing with all the bikes on the market. Both can be electric, but you should know key differences before making a purchase.

Whether you need a bike to get to work, the grocery store, the gym, or to ride down incredible mountain trails, there is something on the market for you. But do you want an e-bike or a hybrid bike? What about the different types of hybrids on the market?

Let’s break down the similarities and differences between hybrid bikes and e-bikes to figure out which is best for you.

What’s the Difference Between Hybrid and Electric Bikes?

Hybrid bikes and electric bikes are very similar. They look alike and, in many ways, function similarly.

Electric bikes are best-known for their pedal assisting feature. This means that they can make pedaling easier for you temporarily or consistently as you ride. This is especially helpful in uphill sections of your daily commute or exercise regime.

Hybrid bikes combine aspects of multiple bikes. It can be an electric bike that also works well off-road. It can also be entirely traditional with some mountain bike features.

It’s best suited for someone looking for something more like a mountain bike but still rides well on paved roads.

Key Similarities and Differences Between a Hybrid Bike and Electric Bike

If you’re in the market for a new bike and are thinking about going electric, here are the key differences between hybrid bikes and electric bikes that you should keep in mind while shopping:

Both types of bikes can have a motor. But, a hybrid bike isn’t necessarily electric. These bikes are called hybrid because they combine multiple bike features.

Read More: Do You Need A License For An Electric Bike?

Who It’s Designed For

Hybrid bikes and electric bikes are very versatile. This means you can take some varieties of these two types of bikes on trails and work through the city.

But, a bike that’s electric and made for commuters will not be the same as a hybrid off-road bike that’s made for city riding and dealing with varied terrain.

Both varieties can be quite expensive. Depending on which features are combined in your hybrid bike and how strong a motor and long-lasting a battery you have on your electric bike, you will be paying a higher price.

These bikes are always going to come with different features. This includes their adaptability to different terrain and how the bikes look visually. For example, hybrid bikes usually resemble mountain bikes, while traditional e-bikes are sleeker and look like high-quality street bikes.

Electric bikes are similar to regular bikes except that they have an electric component. This motor aids your pedaling. It does not replace it entirely. If you live in an area where you’re faced with pedaling up hills daily, having an electric motor give you an extra boost can be a game changer.

Benefits of an Electric Bike

Some of the many benefits of owning an electric bike include:

How Do E-Bikes Work?

There are three modes you can operate most electric bikes in. They are pedal-assist or electric assist, electric only, and pedal only. Traditional bikes fall into the last category as you use all your strength to pedal them.

If you put the bike in pedal assist mode, the motor will do some work for you. The level of assistance in this mode can also usually be changed. The third mode is electric only. This means the motor takes over entirely and is pedaling for you.

Electric bikes come with a few key components that you won’t find on a traditional bike. This includes the motor, the battery, and the controller. Let’s take a look at each element and what’s important to keep in mind when trying to find an electric bike for your daily ride:

A device that comes with the bike that allows you to operate the pedaling assistance and how much it assists you. One type is located on the handlebars, and the other is built into the pedals.

The two types of controllers are pedal-activated and throttle-based. The former refers to a setup where the electric assistance kicks in as you press down harder on the pedals as you would when going uphill.

The throttle-based system is on the handlebar and allows you to manually adjust the amount of help the motor gives you. You can change it from high to low and anywhere in between. These mechanisms may be included as a twist grip or as a thumb-press.

The motor is another key element of an electric bike that you won’t find on a traditional bike. But, as with normal bikes, electric bikes are varied.

You can select an array of power ratings for your bike, from 200w all the way up to more than 1,000w. Most bikes won’t have a power rating over 750w, though.

If you’re interested in a higher-powered electric bike, you should keep in mind that the higher the power, the faster your battery will drain.

Depending on the bike manufacturer, the motor can be found in a few places. Commonly, bikes have what’s known as a hub motor. It’s built into the rear or front wheel. This allows it to push and pull the wheel along as you ride.

This kind of motor usually works very well. But, it does have its downsides. Your bike may struggle if you’re traveling a lot on varied terrain.

There are also bikes on the market with mid-drive motors. These are connected to the crank and gears and, generally, increase your bike’s performance and allow it to adapt to different terrains. But, they do come with a price tag.

The last element that’s important to consider is the battery. These come in either the sealed lead acid variety or the lithium variety.

The latter has at least twice the lifespan of an SLA battery and is lighter. But, they are also far more expensive. The alternative SLA battery is less expensive and works well but will not last quite as long as the lithium version.

What Is a Hybrid Bike?

The term “hybrid bike” has more than one definition. It usually refers to a bike that mixes mountain bike parts and road bike parts. Some of these bikes are electric, and some are not.

The term “hybrid” can be confusing because it does not mean the same thing in the bike world as in the car world. When it comes to a car, a hybrid car is half electric and half petrol or diesel. But the same does not apply to bikes.

Some hybrid bikes are electric, and others are not. A bike labeled as “hybrid-electric” has some electronic parts. Unless the bike says it’s electric, though, you’re safe to assume that it’s a traditional bike with a mix of a mountain bike and road bike parts.

Benefits of a Hybrid Bike

There are many benefits to owning a hybrid bike. They include:

There are several types of hybrid bikes on the market. Here are the most important ones:

An off-road hybrid e-bike can be used on any road that departs, even remotely from the well-paved roads that other bikes are meant for.

You can use these bikes on dirt roads, towpaths, and more. They are built to be durable and are, therefore, usually more expensive than road bikes.

These bikes use the electronic features discussed above, like the motor, battery, and controller, to provide a little, a medium amount, or a lot of assistance while pedaling. These bikes range in price from $800 to more than $3,000.

They usually have around a 750w motor and are well-suited to someone who wants to ride for a long time but doesn’t want to be completely exhausted at the end of the day.

They also provide some added assistance to help you get over, through, and around obstacles you’re more likely to face outside, like downed trees, mud, and tall grass.

These bikes are made for someone wanting a cross between a commuter e-bike and a city e-bike. This kind of bike provides the comfort and durability to take long daily commutes and is faster than some other models, due in part to their weight.

Although great for city-riding, this is not the bike for outdoor recreation.

These bikes are usually used for short trips around the city and some light off-roading. They’re best for a short daily commute or a relatively even trail outside the city.

While they aren’t as durable as off-road hybrid bikes, they work well for those who want to ride into work and then cruise through a nature reserve or to the lake on the way home.

Choosing an E-Bike or an Electric Hybrid Bike

How are you primarily going to use your bike? Is it for recreational activities like off-roading? Or is it for your daily commute? Or perhaps it is a little of both?

Knowing exactly how the bike will be put to use will help you narrow down whether you need an electric bike or an electric hybrid bike with the features of a mountain bike.

Everyone knows that the more technology you throw at a bike, the more expensive it is. When you’re shopping, make sure you’re paying for features you will use.

If you’re thinking about a hybrid electric off-roading bike but may only use it outside the city once or twice a year, it may be a better investment to use an urban hybrid e-bike instead.

Hybrid e-bikes tend to be sportier looking. If this isn’t the style you’re looking for, then a traditional e-bike may be better for you.

Electric bikes are usually more powerful than hybrid bikes as they are only trying to do one thing–take you quickly uphill.

However, suppose you’re concerned about not having enough power or battery to make it to your destination. In that case, you may want to go with a traditional e-bike, as they generally have a higher power supply.

Both bikes have safety features like reflective panels to help motorists see you in the dark.

But, when buying a bike, you may want to consider what else the manufacturer has done to keep you safe. Are there lights in the tires or on the rims? Does the bike come with headlights? Does the bike have an anti-lock braking system? This may impact your overall budget as well.

To conclude, e-bikes and hybrid bikes have some key similarities. Electric bikes always have a motor, while only some hybrid bikes do.

Hybrid bikes are usually made to go off-road while also getting you through your daily commute. Traditional e-bikes, on the other hand, are made purely for the smooth pavement you’ll find on your way to work.

Both bikes have pros and cons, including price, versatility, safety features, motor strength, and more. Make sure to take all the elements of both types of bikes into consideration before making a purchase.