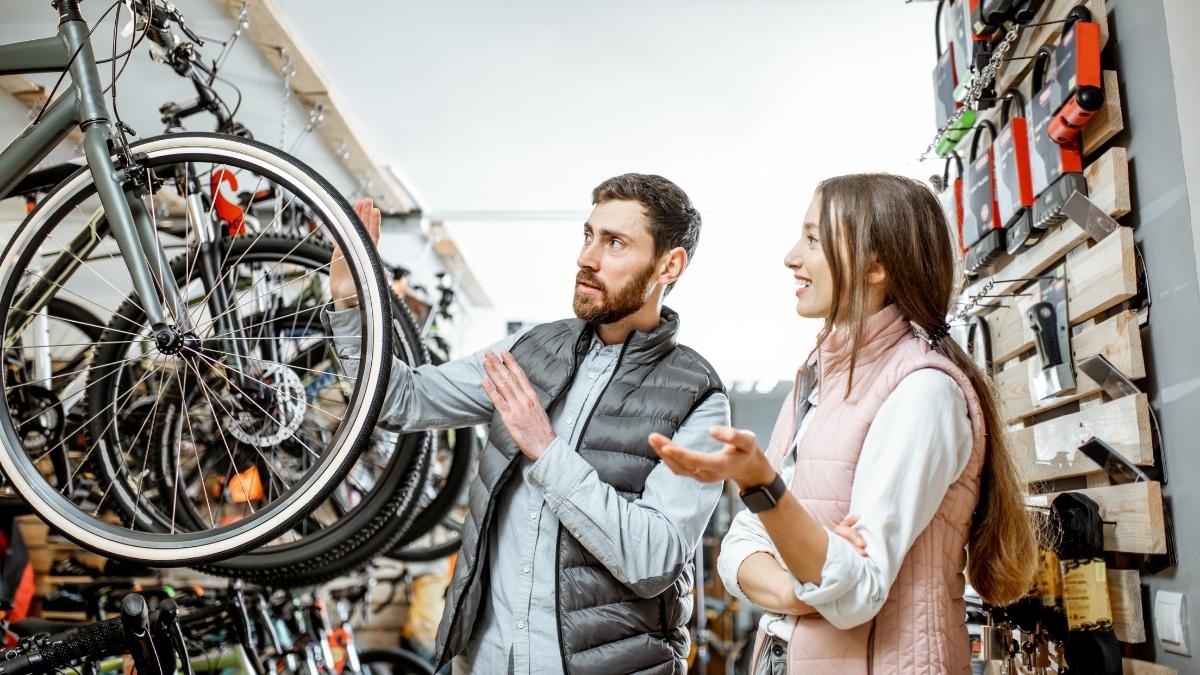 With traditional automobiles becoming increasingly expensive, electric bikes have become a practical alternative for many commuters.

In addition, fuel costs such as gasoline and diesel prices change regularly and cause fuel emissions, while electric batteries do not.

Many commuters in sub-urban or big-city areas have begun to see the appeal of electric biking over other forms of transportation.

Between fuel costs and rising prices to monthly insurance payments, it’s no wonder many vehicles are becoming impractical financially for people.

Certain types of electric bikes, or e-bikes, don’t require insurance and are significantly more affordable than higher-end bikes or automobiles.

Continue reading this article to learn more about e-bikes and their cost-effectiveness as a mode of transportation.

What Is an Electric Bicycle?

Electric bicycles are motorized bikes that use a rechargeable battery as a power source. Most electric bikes fall under one of two models; one assists the rider’s pedaling, while the other utilizes a handlebar throttle.

In this article, we will primarily discuss pedal-assist e-bikes and their pricing.

Pedal-assist e-bikes assist the rider by adding power to the rider’s pedaling using a motor. The electric motor increases speed considerably while requiring little effort from the rider.

Pedelec bicycles are considered traditional in most countries and do not require registration or insurance. Pedelec Bikes, or EPAC, which stands for Electronically Power Assisted Cycles, are practically identical to normal bicycles.

However, a pedelec bike utilizes a low-power electric motor to assist the rider’s pedaling. The electric motor will help the rider pedal until they reach a speed usually of 16 or 20 mph.

The electric motor on a pedelec is limited to an output of no more than 250 watts. As a result, pedelecs commonly use hub motors. A hub motor requires less maintenance than other e-bike motors and is more affordable.

Pedelec bikes are the only form of e-bike still allowed to be ridden in traditional biking lanes. Pedelecs are ideal for people living in areas with many inclines on the road as the motor significantly reduces fatigue when riding uphill.

The reduced fatigue and ability to maintain a steady speed allow a rider to travel for longer distances without tiring.

Read More: Is It Hard To Pedal An Electric Bike?

Due to the lower power output of a pedelec’s motor, they are usually the most affordable type of e-bike – this is further showcased when considering that pedelec bikes do not require registration or insurance.

Depending on the brand, a pedelec bike will likely cost you anywhere from $800 to $1500, though some may cost more.

The key benefits of a pedelec bike are:

S-pedelec bikes are still pedal-assist only; however, many models also include a throttle or other power-on-demand features.

Unfortunately, this makes S-pedelec bikes lose many practicalities of a normal pedelec bike. In addition, insurance and registration are required for an s-pedelec bike, and riders cannot use dedicated bike lanes.

Many s-pedelec bikes use mid-drive motors to increase performance capabilities and have the ability to shift gears. Mid-drive motors weigh much less than hub motors and are integrated into the bike’s frame.

Changing the tires of an s-pedelec bike is much easier if it has a mid-drive motor because the motor will not be directly attached to them.

Like many automobiles that have an ECO mode and several gears, e-bikes with mid-drive motors have gears that directly correlate to performance and distance range.

S-pedelec bikes reach speeds of 28 mph with ease, making them ideal for commuting to work while still exercising.

Considering that the max output of an s-pedelec motor is 4000 watts in some areas, the pricing can vary wildly from bike to bike. The price of an S-pedelec bike will significantly depend on the brand and desired features included with the bike.

As an example of this varied price range, a high-quality S-Pedelecs costs anywhere between $3500-$8500, although depending on the manufacturer and features, the prices can go much higher.

S-pedelec bikes are a great choice for individuals who want the most of their e-biking experience with more features and customization.

The key benefits of an s-pedelec bike are:

One of the most significant factors that play a role in an e-bike’s pricing is the make and model of the bike.

E-bike manufacturers utilize different materials and methods to produce their bikes which plays a part in the price discrepancy.

A few of the more widely known and well-received e-bike manufacturers are:

Ride1up started as a group of people who built their e-bikes. Efficiency is the primary focus of this manufacturer, as they want to make e-bikes as accessible as possible.

In addition to resoundingly low prices, Ride1up offers a 1-month money-back guarantee and a 1-year warranty.

Ride1up offers pedelec and s-pedelec e-bike models. Most of the bikes sold by this manufacturer are less than $2000 and offer monthly payment plans.

Bosch eBike Systems offers some of the most innovative digital accessories for e-bikes. With Bosch digital systems, you’ll have many of the same displays for your bike as a car, but with the efficiency of an e-bike.

For example, Bosch drive units are an excellent tool for any e-bike rider. The drive unit will measure your pedal cadence over 1000 times a second to accurately measure and display your riding style.

In addition, it’s possible to fine-tune each gear of a Bosch drive unit to your personal preference to maximize efficiency or performance at your leisure.

Many e-bike manufacturers use Bosch drive units in their production; however, a drive unit alone can cost anywhere from $300 to $800.

Ancheer is an American-based e-bike manufacturer that provides an excellent all-in-one shop for new and seasoned e-bike owners.

From brand-new bikes to parts of any kind, Ancheer likely has it available at an affordable price.

In addition, nearly all of their bikes and other products start at a price below $1000, making Ancheer ideal for any e-bike rider on a budget.

First-time e-bike riders will likely have to purchase much more than just the bike itself. For example, if an e-bike requires registration, it likely also requires the use of a helmet and other safety gear when riding.

Safety is one of the most important things to consider as an e-bike rider because you are more vulnerable on the road than the cars around you. In most countries, bike helmets are required by law to be worn when riding s-pedelecs bikes if it is legally classified as a moped or motorcycle.

Biking helmets usually cost anywhere from $40-$80, depending on the level of quality.

Suppose you wish for more security beyond a biking helmet. In that case, you can also invest in padded clothing or elbow/knee pads. Many cyclists wear padded shorts to increase protection and comfort when riding for long distances.

A pair of bike shorts roughly costs anywhere from $20-$50. Arm and leg pads are a little more pricey depending on the brand, but a full set can be anywhere from $25-$150.

One of the most important components of any e-bike is its battery. The battery of an e-bike is the power source for the bike’s motor and determines the range that it can run on a single charge.

Most e-bikes utilize lithium-ion batteries mounted onto the bike in various places depending on the style of battery. E-bike batteries usually cost around $200-$400.

Read More: Do Electric Bikes Charge As You Pedal?

Suppose you’re worried about your e-bike getting stolen while at work; you can invest in a GPS tracker to know its exact location at all times.

GPS trackers are designed to be unnoticeable on a bike, so a potential thief will not know it’s there.

Many GPS trackers are priced below $100, but some may cost more depending on the design and signal strength.

Read More: Can You Ride An Electric Bike Off-Road?

Registration and insurance are key factors in the financial investment of any vehicle. All bike registrations cost a flat $10 fee per bike.

Electric bikes are an extremely efficient mode of transportation for millions of commuters worldwide. From fuel costs to general upkeep, traditional automobiles are far more pricey in comparison.

So while first-time e-bike owners need to invest in more than just a new bike, this is far more affordable than spending years to pay off a new car.